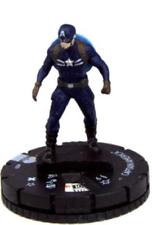 Fighting for the safety of innocent lives helped Rogers find his place in the new world, prompting him to join S.H.I.E.L.D.[2] in order to maintain peace. However, after serving and completing multiple missions, Rogers discovered that HYDRA[3], whom he thought had dissolved in 1945, had existed in secret as a parasite within S.H.I.E.L.D., and that they were planning to use S.H.I.E.L.D.'s new Project Insight[4] to launch a new world order. Additionally, Rogers' best friend Bucky Barnes[5] was revealed to still be alive, now operating as a brainwashed assassin for HYDRA under the designation Winter Soldier. Along with fellow Avenger[6] Black Widow[7], Rogers teamed up with agent Maria Hill[8] and new friend Sam Wilson[9], and helped bring an end to the HYDRA Uprising. With the immediate threat of HYDRA quelled, Rogers and Wilson embarked on a personal quest to locate Barnes.

Retrieved from "https://heroclix.fandom.com/wiki/WS001_Captain_America?oldid=4578"
Community content is available under CC-BY-SA unless otherwise noted.